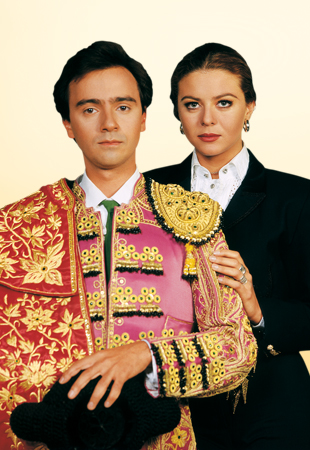 On the afternoon of the fourth of November, 1,990, César Rincón receives a deadly horn wound on his right thigh while he is fighting a small bull by the name of “Baratero” (Cheap One) at the “Plaza of Palmira”. Immediately he is transferred to a nearby hospital to be operated on. At this moment César Rincón stops being the great bullfighter he is and turns into just another human being who is loosing his life second by second. This is the beginning of “PUERTA GRANDE”. The story continues with César Rincón’s childhood days. César is the youngest son of a struggling photographer. He spends his days playing to be a bullfighter; a dream that by constant sacrifice, endurance and dedication turns out to be a reality. César faces a great number of hurdles along the way, but with the help of Gonzalo, his father, and the advice of Terencio, an old neighbor bookstorian, he stars as a fighter of young bulls “novillero” to then become the alternative of December eight’s, 1,982 performances. It is then that he meets Paloma Galdés, a beautiful spanish “rejoneadora”1 that steals his heart. This makes all the difference to him, who regardless of his bad economic situation is able to travel to Spain for his first time, city where he does not get to see his picture on an important afternoon performance cartel. He gets a call with the news that his mother and his sister Sonia died while placing candles under saints, as they prayed for him. This forces him to return to Colombia, beaten and despaired. Through his life he has only experienced disappointments. To make things worse, the rivalry that his childhood friend “El Cordero” feels towards him, causes a bullfighting strike, making job opportunities scarce. A light shines trough when he meets Luis Alvarez who becomes his agent and takes him to Spain again. On his second trip with Alvarez, César is able to perform at the “San Isidro” Fair and is successful at “Las Ventas”, the most important bull ring arena in the world, where he exits through “The Grand Door” (PUERTA GRANDE) The afternoon of May 21st, 1,991 marks the rising of a career which will always have as a slogan an old saying that old Terencio so often repeated: “... o tricks César ... no tricks”.