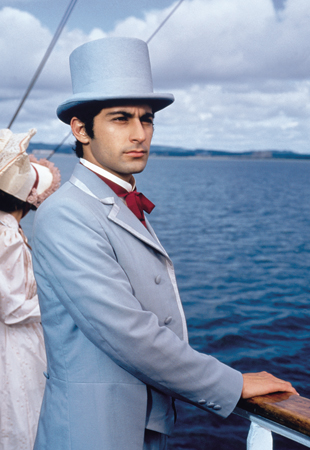 Based on Jorge Isaacs’ original novel, the script was written by Gabriel Garcia Marquez, and directed for television by Lisandro Duque Naranjo. Maria is the story of a frustrated love, fed by the feeling of hope and perpetuated by death. Maria, as a child, looses her parents and grows up with her cousins, Efrain and Emma, raised as their brother and sister. Efrain returns home after finishing high school. Later, Efrain and Maria fall in love, but Efrain considers this love incestuous, thinking he is Maria’s brother. When he finds out that Maria was not his sister, his love for her becomes stronger. Their happiness is interrupted when Carlos, Efrain’s best friend, proposes marriage to Maria. Her love for Efrain is sincere and deep so Maria rejects Carlos’ proposal. Later on, a handsome young Lt. Barrientos, in charge of a military mission, shows up at their house. His politeness towards Maria provokes Efrain’s jealousy, which nearly ends up in duel with Lt. Barrientos. The officer explains to Efrain that he is not interested in Maria and then leaves. But there is even a bigger threat to the lover’s plans when the father decides to send Efrain to medical school in London. This very threat makes the epilepsy evident in Maria. This illness that she has inherited from her mother, which seems more like a deep sorrow in her heart, than the pain it causes in her body, since she misses her beloved one so. The perspective to cure Maria’s illness gives Efrain an incentive to go to London and study medicine. The time to say good-bye has come. Efrain’s departure makes Maria’s health worse. The things that keep her clinging on to life are Efrain’s love letters and the hope for his return. One year later Efrain gets news from home telling him about Maria’s poor health. In his mind he sees the woman he loves calling him. However, when he arrives, Maria has already died. Tortured by grief, he wonders around the places where they had their most tender moments. Finally having written the story of his unhappy love, he then rides off into the night.