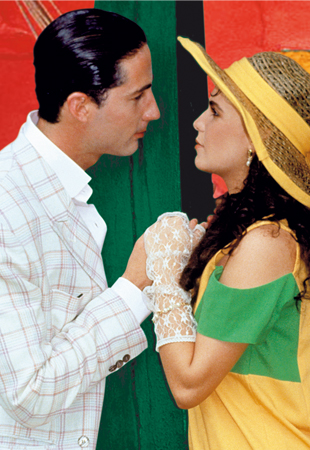 This series, which takes place initially during the 1920’s, tells the deep and everlasting love story between Rosa Lenoit, “La Momposina” and Alejandro Molinares. This story intertwines with a town war that went on between the towns of “Santa Cruz de Mompos” and “Nuestra Señora de La Candelaria del Banco”, both located at the banks of the Magdalena River, amidst the Colombian tropic. Rosa, who still has not met Alejandro, is being pressured by her parents into accepting Captain Rito Perilla as her boyfriend, a man who is much older than her and who is really in love with her. Captain Perilla has promised Rosa’s father, General Trinidad Lenoit, that if Rosa marries him he will bring to Mompos’ port his shipping company. Living at “El Banco” is Alejandro’s father, “El Galeno” Molinares, a man with a vision for success, who is determined in making “El Banco” the most developed region in the country, and in doing so he belittles the success of the Lenoit family. With this in mind, he builds a theater to bring the opera, and he partners with the German Hindenbur to bring a hydroplane, starting the first air travel company in Colombia. Alejandro is a bystander with regard to his father’s affairs. His main purpose in life is flirting with all the women in town, and partying with his friends. This is all to change on the day he meets Coralina, a beautiful dancer that arrives into town with a French opera company, and they decide to leave town and get married. Through life’s turns, having Alejandro and Rosa each formalized their relationships, they find in each other true love. At this time all sort of conflicts arise among the towns on Santa Cruz de Mompox and Nuestra Señora de La Candelaria del Banco that stir a break up in Alejandro and Rosa.